by Muhammad Abdullah
in Sports
0 0
0 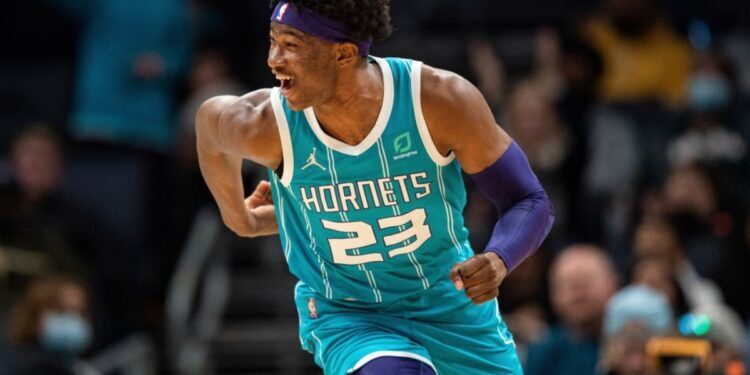 Don’t try to tell Kai Jones that the summer league games don’t matter. The rangy big man for the Charlotte Hornets, Kai Jones, wasn’t happy with his play in the team’s opening Las Vegas Summer League loss to Indiana, 94-86. He is aware of the similarities even though he is not purely concentrating on his particular numbers. Jones stated, “The team comes first.” And because I’m out there for the majority of the time and have the greatest impact on the team due to my ability to play on both ends, I believe the team will succeed when I perform well. Therefore, I believe that the team will perform better the better I play. Therefore, I would say that (Friday), I am to blame. I must make shots, zero in, and concentrate. Jones had trouble shooting against the Pacers, scoring just 12 points on 5 of 15 attempts while also grabbing nine rebounds. He struggled mightily from beyond the arc, missing all ten of his attempts. Jones did not intend to begin a crucial offseason for his overall development in that manner. He recognizes why it’s important for him to mature and maintain his composure after trying experiences.

It’s important for life in general, just to be present, said Jones. “I had a sense of being there on Friday. You see, I was there in the moment. Hold my follow-through, please. Shots were fired both in and out. Just keep shooting and never give up. That is the main focus. preparing for the next shot properly and having confidence in your abilities. In other words, always maintain your confidence. Don’t let it waver.

Since Jones began playing the game as a teenager, nothing will be simple for him. He is a native of the Bahamas. With the 21-year-old, patience and context are crucial. The most important thing for Kai, according to Hornets summer league coach Jordan Surenkamp, is to keep things simple. “And that applies to everyone. A simple game is a basketball. Just keep things straightforward on both sides of the ball. His enthusiasm is very contagious. And just like he did on Friday, he takes great care of our team. He is someone who gives us a spark when we need one. Again, we advise him to keep things straightforward like we do for all the guys. He has yet another chance to learn something. Jones claims to be making notes in his head. He is the harshest critic of himself and is looking for concrete results as he tries to work his way into the Steve Clifford-led Hornets’ starting rotation. His overall success is going to depend on perfecting his jumper. “Honestly, I think I could have been more focused on the first couple of shots in the beginning,” said Jones. “… I thought I left a couple of my shots a little early. I just started jogging back after feeling like it was going in. Basketball seems to want me to focus on the present and follow along. I’m inferring that from the game.

At practice on Saturday, a well-known face was noticed. After clearing the league’s health and safety requirements and arriving in town right after a flight, LiAngelo Ball returned to action. Ball skipped the Hornets’ summer league debut and the entire minicamp that took place before they arrived in the desert midweek. If used, Ball, a fan favorite in Las Vegas last season, could give the Hornets another option. It might not take long to get him up to speed strategically either. Surenkamp said, “He gives us a lot of value in terms of shooting the ball. His size, as a bigger child, allows him to switch, play, and defend multiple positions after pin-downs (positions). He was with us in Greensboro, so he already has a solid conceptual understanding of what we are doing. We will need to work on some defensive things for him, but in all honesty, I believe he will be in a good spot. mentally, at least. Physically, things might be different. “Where is he at in terms of conditioning, I think, is the biggest thing with us with him?” said Steenkamp. He has been observing health and safety regulations while sitting in a hotel room. We must therefore assess that information while naturally discussing it with Coach Clifford and the team to continue working out the details of our rotations and other arrangements. Surenkamp is attempting to foster development while balancing gameplan-specific situations and preconceived lineup combinations. It is difficult to get that right. Yes, it’s something that the organization will need to continue discussing, Surenkamp said. “Friday at the game, you kind of saw it. Kai hasn’t necessarily played the “4” a lot before, but he is doing it now. Therefore, there was some learning involved with him. The same thing happened when JT Thor briefly played at the “3.” JT hasn’t done a lot of that, so it served as an evaluation opportunity for our coaching staff and our company. However, in terms of how it will all fit together over the course of the following couple of games, we still need to talk about it and give guys more chances. We want to do everything we can to put the guys in the best possible situation, but there are also some opportunities that need to be evaluated.

When the Hornets learned what happened to one of their own on Thursday, they were saddened. Scottie Lewis went to plant while playing defense in practice, according to a league source, and all of his teammates immediately became very worried. Lewis underwent surgery later that evening to repair a fracture in his lower left leg. Although there is no estimated time for his recovery, the rehabilitation will be intensive. Lewis’ summer has already come to an end. It’s difficult, Surenkamp remarked. “Any injury at all for anyone — whether it’s the Hornets or not — is something you never want to see. Scottie has worked as hard as anyone this offseason for this moment. Therefore, it is undoubtedly a challenging situation that no coach, organization, or teammate wants to witness. He will, however, bounce back stronger. He is a strong young man. He wants us to keep competing and is currently in good spirits. He’s going to help us, too. He has our best wishes. He has the support of our entire team and organization, and we will keep doing everything we can to help him.